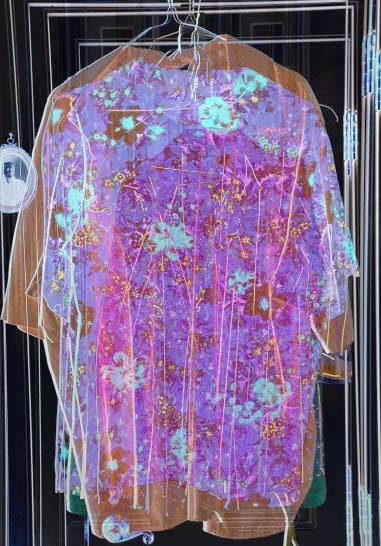 The photo above is a composite I made of some of the blouses and T shirts that were left after Marge died.

Who would have thought that such a simple task could be so gut wrenching?  I  suppose I did without realizing it, or else I would not have put off getting this task done.

When a loved one dies, particularly if that person lives with you, a big question that always appears in  bereavement groups is “What do do with his/her stuff?  There’s  a different answer for every person.  At one extreme, there are those who treat the dwelling as a shrine and do not touch a thing, just leave it as it was when the other died.  The other extreme is to give away, haul away, throw away, everything the other person had, not leaving anything for a troublesome memory to arise.  I was talking about this with a friend and someone she knows even tore out home improvements to the house and yard that her husband had done, changed it to the way she wanted, and went on a nice trip came back tanned and fit, a new identity.

I am somewhere in between.  Our children got first choice on anything, I gave some objects to a couple charities I knew of to auction at a fundraiser, and Goodwill got underwear, sox and other non personal items like that.

That still left a lot of clothes in the closet. What to do with them?  My daughters, Ingrid and Louise were here at the end of October to honor the date of Marge’s death.  I had arranged for the three us to have a session with the bereavement counsellor who was very helpful. That solution was to have a quilt made from some of the clothes Marge owned and each girl would have the quilt as a physical reminder of Marge wearing these clothes.  We would never have thought of this and said it was a great idea.

My sister, Karen, who lives in Ontario, Canada is a quilting enthusiast, belongs to groups of fellow enthusiasts and knows a lot about this subject.  Her suggestion was to not mix fabrics, but choose similar fabrics and she would make, probably two banners from them.  I went through the closet, took out all the shirts that were cotton or cotton blend and took photos of them.  These I sent to Karen for review.  She got back to me on this and so, of course the next step is up to me.

So, I did a washer load of the selected clothes so they would all be clean, and put them in a basket with a towel to keep the cats from thinking I had built a nice nest for them.  I checked shipping options with a company that does this as a business, and bought a box that I think would be the right size.  And there they stayed for a while, I just could not do any more.  The action needed just bothered me, not distressed me, but I was almost fearful of doing what had to be done.

On Jan 4, I decided to do what needed to be done.  Simple.  For the shirts with patterns, leave alone.  For the others, with logos or designs embroidered or printed, cut away the plain shirt and save the rest for quilting.  I was feeling strangely uneasy about this, but got out a card table, scissors and a sharp knife.

I got out the first shirt and was about to start trimming away, I started to cry and felt like I had been kicked in the gut by a size 14 foot.  Going back to home hospice days when she was dying, Marge would become uncomfortable in the hospital bed and not warm enough. The girls came up with the idea of taking old plain T shirts, slitting them down the back, and making a shortie hospital type nightgown for  Marge to wear over the gown she had.  Now, with cutting tools at hand, and other shirts, all that came back to me in a terrible visual memory.

I had to sit down, tell myself out loud “No, we are not doing that over again, those painful days are over.  I am preserving pieces of memory to be transformed by my sister into an artistic remembrance.”  Verbalizing helped.  I treated the scrap remains with a sense of dignity and put them all in a clean plastic bag.  They will have to be tossed out, but not in the trash can with rotten vegetables and old tin cans.

With that, I was able, sadly, to do what I had set out to do.  The package is now in the USPS, on its way to my sister in Canada.  Another reminder how in grieving, anything can trigger a very excruciating memory.  I  don’t know when the next one will come, but I know it will.  That’s the way grief works for me.

I am a retired Professional Engineer who spent my working life in the electric utility industry. I am now a volunteer instructor at the University Nevada Las Vegas (UNLV).
View all posts by R. F. →
This entry was posted in Vegas 2010 -? and tagged clothes, grief, grief recovery, memoir, quilting. Bookmark the permalink.