We lived at the Smith Lane apartment through the winter. On quite cold weather, I would remove the battery from the car and take it inside. Then I would reinstall it before leaving in the morning. Just to be sure. Syracuse usually has a lot of snow in the winter, sometimes 30″ or more. I can remember one time when we had one of those storms in the winter on a weekend. It stopped at night and Marge and I went out for a walk in the evening. Maybe down to Colvin Street, that was nice. The main roads had been plowed and I don’t recall any cars on our walk.. It was cold, the sky was now clear, and visually, almost like a 3D Christmas card.

We moved again, I think in the spring. This time we rented the bottom half of a duplex at 500 Euclid Avenue. The owner, I think the owner’s name was Pandelly, who lived in the upper half. This was an older residential area, maybe a half mile from the University with sidewalks all the way and that was a big improvement. It did not have coal heat, Thank God, and though maybe 40 years old then, it was in good condition with more space than the apartment. Since it still exists and is so close to the University, I imagine it is valuable property.

By that time, Marge had obtained a part-time office assistant at Hendricks Chapel. She got along well with the secretary so that was good. She was still taking classes, maybe 2 as we could not afford a full semester. To, this arrangement was much better than her staying alone as she had to do in the summer.

One day, maybe in May, Marge went downtown by herself to do some shopping.  She told me about the trip when I got home that evening, and of course I was interested in what she purchased.

She had purchased two shirtwaist housedresses. These were popular in the 50s and early 60s. The image in today’s post was obtained from a Google Image search and the company who posted it, Va-Voom.com, sells vintage clothing still. The one on the mannequin above is just like the blue one Marge bought. It looks good today, and it looked even better when Marge modeled it for me. So, I complimented her on her selection, that it was both practical and that she looked good in it. 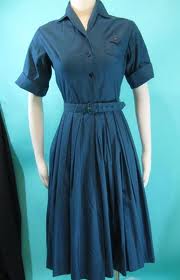 The second dress was pink, of the same design. The color was fine, but, to me, it did not fit quite as well on her. Probably a little variation in the stitching which is yet today something to check for when buying clothes. As tactfully as I could I responded that it was OK, but for some reason, the blue one looked better to me.

Then the dam burst. Marge starts crying profusely “You never like anything I do!!” At that time, and for a long while after, Marge had a feeling of low self-esteem, and was very easily upset and defensive. She had a fragile exterior, and in truth I really did not understand her inner self very well. And so, this occasionally led to mutual mis-communication and misunderstanding. My statement about the pink dress was, to me, not a criticism of her, as a person, but obviously not received that way.

So we talked our way through that event and later, as time went on, Marge began to value my opinion on how clothes looked on her. She would often invite me to accompany her on a clothes buying trip, and would refer to me as her “Fashion Consultant.” I really enjoyed doing this as it made us partners in helping her look and feel good about herself. Did this happen overnight? Of course not, but it did evolve as we both, with difficulty, became more and more a real couple, not just a man and woman living together.