Back Home At Last!

At last! official orders had been prepared and we in the 138th TACFRON came back to Syracuse in August of 1962. Of course, we were still on active duty until the end of the month but we were back home. The end was near.

Of course I was overjoyed to be united with Marge and Ingrid again. How Ingrid had grown! Marge’s figure had come back and she looked beautiful!. Of course, she had filed out a little here and there as a result of childbirth, but if anything, I think it just enhanced her appearance. She looked like what she was, a delightful 22-year-old young mother and not a school-girl.

As for myself, my hair had got a bit thinner and I had grown a moustache.I thought it gave me a continental flair. At that time on base a haircut was $.35 and a moustache trim was $.15 so it was quite a bargain. Sometime later in life I did shave it off. Marge told me “Bob you really look plain without that”, so I grew it back.

Marge had brought what she could in our car, and I had my duffel bag and the improvised foot locker made of plywood that was hurriedly constructed for us on our departure. Going back in time a bit, I want to mention that while I was on active duty, I was still covered by the health insurance from Crucible Steel. At that time, there was no coordination of benefits. Although many of Marge’s health expenses, were paid by the Air Force, they were also paid for by my company insurance. I made sure of this while I was still employed and it was perfectly legitimate. Marge used the money to buy things such as a crib, baby carriage, etc. That helped as active duty had made a 75% salary cut.

We had to find a place to live at least until I got discharged. We found a furnished apartment on, I believe Erie Blvd. and rented it for a month. You entered the living room directly from the door, then a small dining area, then the kitchen, bedroom and bath. livable but nothing either of us wanted to live in for any longer than we had to. We did locate a rental home at 333 Snowdale Drive in Seneca Knolls off from State Fair Blvd. close to Crucible Steel. It was available the first of September so we took it.

Of course, neither of were the same persons we were a year ago. We had been apart almost a year and now I was a father full-time, not just for a 2 week furlough. We were now parents and a family by ourselves, a nuclear family,(though I don’t think that phrase existed in 1962).Now we were a unit, not me far away and Marge living with her mother. So, this did not go smoothly at times. As a point in fact, ever since we had become married life was not always “Wine and Roses” but also sometimes “Stormy Weather.”

We had to deal with the friction of dealing with misunderstandings, miscommunications,etc. we had prior to my leaving, as well as learning how to now jointly be parents. Of course Marge already had 6 months practice, and I was a neophyte. Having Ingrid as early as we did was not our original plan but of course we welcomed her, loved her, and still do. Family planning and birth control were primitive by today’s standards. We learned, mostly by trial and error.

As the preface to this blog says “Discomfort is not evidence that a marriage is not working, but that it is working.” By that measure, our marriage was working well. At least I did not have war horror memories to deal with as I am sure my father-in-law, Col. Sutherland must have had after returning from WWII. He did share one war memory with me and that was enough. Then on her side, my mother-in-law, Dorothy Sutherland had to cope with raising her children, and all the other tasks that were at that time, “man’s work.” No wonder their marriage broke up. That is still a cultural problem with military families and from the point of what could have been, we had it pretty easy.

Life at the base was easy and sometimes just boring as we went through the paperwork and details of returning to National Guard status. There was a regular USAF unit at Hancock field and we could go there to eat if we wished. Their food was much better than we had at Phalsbourg. The unit was a small one, a radar tracking station part of what was then called the DEW line. We had a tour one day and I had more than a passing interest in electronics and technology. The radar scopes must have been at least 30″ in diameter and I was amazed, I had never seen a tube that big. Very interesting.

On our final day as part of the Air Force, we assembled on a runway dressed in our summer dress uniforms for some speeches and a fly over by the squadrons planes. Quite impressive and an important day for all of us. Civilians at last. 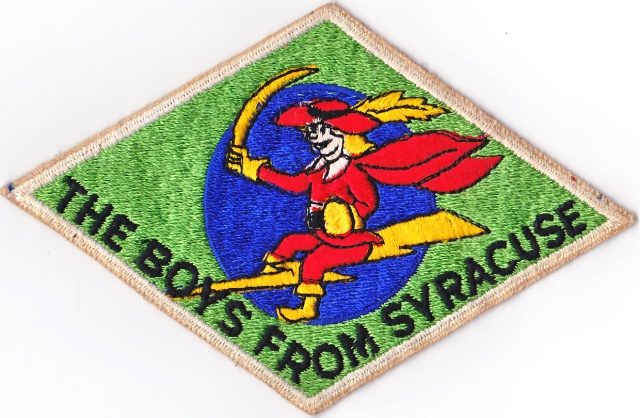 The image above was one we got sometime in our final days in the 138th squadron. I think everybody got one, but as I was looking at mine, someone saw it and asked me “How did you get that, and how much did it cost?” My reply was “A year of my life.” That was not out of bitterness just a wise-crack. You can buy them now on E-Bay for $5.95, if anyone is still interested.

I knew what I was getting into in 1959 and considered myself quite fortunate. I did my duty and served my country when the time came. I have no regrets about that. In fact, when I go to Marge’s burial site in the veterans cemetery I do feel a sense of pride that when my time comes, I will be joining not only her, but all the other men who have served for our country.

The challenge now is to re-integrate into civilian society, my job, Marge’s schooling, and planning on our future. Time enough for that later.