Have you ever had difficulty making a major decision?  You know, such as “Is he/she the right one for me, or not?”  “Should I buy this house/car/boat?”   Probably most of you have at one time or another.  I decision that I wrestled with for months was what to do about my job at GAF?  On the one hand, the job was the most interesting I have ever had for the various assignments I was given.  Also, I was then employed, in the late 60s, almost at the dawn of the computer age .  This could be the opportunity to advance in what was obviously to have tremendous opportunities for an engineer and statistician in the years to come.  Also, my boss gave me wide latitude and had a great sense of humor.  At that time I shared an office with a technician and we got along well.  One time we thought we would play a little gag on Cal and somewhere I bought a very large B&W poster of Raquel Welch wearing a  bikini or something like that from a recent movie.

From an engineering perspective, Ms. Welch was very well constructed indeed and the poster left very little to doubt.  Our office was long and narrow in shape and my desk was at the rear. There was space on the end wall of this office, and with the help of my office-mate, we taped the poster to the wall during the lunch break time.  That afternoon after Cal came back from lunch, I called out to ask him to help me with a coding problem I was dealing with.  Of course he did and bent over to see what I was working on and I made up some question about how to handle an algorithm.  He then straightened up, looked over his shoulder and there was Ms. Welch in all her sensuous glory.  Cal laughed so much, I almost thought he might have troubles breathing.  He enjoyed the gag even more than me and my office mate and I believe called in some of the other engineers.  I could never have done that anywhere else.  Of course, I took it down when the show was over.  Sexual harassment was not an issue then, but still…..boys will be boys and so will engineers. 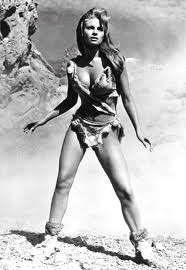 Also, some of the other operation managers were about my age and we often ate together for lunch.  We had got into a rut just going to the same places every week and one of us came up with the idea that every week, one of us was to find new places to eat that were not too far away.  It was a great idea with some of the places being little hidden gems and others should have stayed hidden.  so, the job itself, as well as the work socialization made for a very satisfying work experience.

On the other hand (there is always at least one other hand) my analysis of the economics of the GAF film business unit showed me that the company did not have a good future.  It actually took me a while to figure out both the plus factors as well as the minus ones.  Although I was promised the department manager’s job, nothing happened for Cal and so also, for me. I received my MS degree the first of June 1969 and my plan was to line up interviews and see who else might be interested, see what kind of offers I received and then with that in hand, I would let GAF know that I was considering leaving if the promised promotion did not materialize.

I did line up interviews that summer, not sure of exactly when, but probably July.  I almost did not schedule the last interview I had which was for an electric utility.  I knew nothing about this industry either from experience or education.  It was and is headquarted in Allentown, PA which was not really a long drive on Rt 81 from Vestal.  After some paperwork preliminaries with the Personnel department I went to meet Mr. Edwin Seidler who was the manager of the Transmisssion and Distribution Construction department. In 1969, customer growth at PP&L was about 6.5% per year and this entailed a lot of  construction work.  Ed was a graduate engineer and  earned a Master of Business Administration degree.  He wanted to hire someone like me who he hoped could take a fresh look at the construction work from the perspective of this being a system, and to suggest improvements.  We really hit it off and I enjoyed the interview.  Probably most of you have had an experience where you just hit it off with another person, same gender or otherwise, and you are in the same zone.  It was that kind of experience.

Marge in June of 1969 location unknown

When I got back to Vestal, I went over my week with Marge and told her that I was strongly considering the PP&L situation as I was certain they would make me an offer.  We both liked the Vestal house which was our first one and we had made improvements to make it our own.  We both had friends there and Marge’s circle of friends were very important to her.  She was concerned that if we were going to move, we had to do it before school started.  Marge was very supportive and understanding, did not want to move but realized it was part of life.  She had been an Army brat and moved a lot in her lifetime, much more than I. The expected job offer soon arrived and it included about a 20% raise in salary.  When I went in to work at GAF next day, I told Cal that I had an attractive job offer, and if the promised promotion did not occur, I was going to leave, though with regrets.  We then had a meeting with the plant manager who asked for 2 weeks more and I said sure.  2 weeks came and went and nothing happened. I handed in my resignation promising to finish as many of the things I was working on as I could, but I wanted  to start at PP&L no later than September 1, 1969. I was given a very pleasant farewell party and several others quietly told me they were thinking of leaving also. Just before this, as I recall now that I think back, I contacted PP&L and told them I was very interested but it was a family decision and wanted to bring Marge down to look at the area and houses for sale.  No problem there for either PP&L or ourselves.  This could work.

The next thing to do was sell the house.  I tried a For Sale ad in the local newspaper and that really did not lead to anything.  I believe we listed it with the agency who sold it to us.  It sold reasonably quickly with a closing date for the end of August.  During that month, I was able to fly to Allentown again to look for a house to rent until we got settled.  I found a stone farmhouse about 22 miles from Allentown.  The price was reasonable and the home in good condition despite it being built around 1810.  It did have a peculiar feature though.  That was a very small, very slow stream in the basement.  The water table there was very low and the practice for food preservation before refrigerators had been to build what is termed  a spring house, basically a concrete enclosure that the water could flow into and out of.  Food was placed  into something like milk cans placed in the cool water and the water kept it at about 50 degrees.  This house had a smaller version of a separate spring house in the cellar and the little stream was the source of fresh water for it.  The Realtor would not rent it to us until Marge had seen it, since he had trouble along these lines in the past.  When I got to the hotel I called Marge and did my best to explain the stream in the basement and that they would not rent it until she put her OK on the deal.  So, another trip for both Marge and I to see the house and though it was a bit strange to her, Marge agreed and we signed a year’s lease. This was a big moment in our lives. We experienced anticipation for the future, as well as regrets for leaving Vestal, forever a special place to us.

The exact date then is a bit unclear to me now, but I was able to start on Sept 1, 1969.  I stayed in a hotel for about a week while Marge took care of the mover and other details on the Vestal end. Everything fit together even if off by a few days.  This seems  a logical place to end this post, and the next one will cover our transition to living on the fringe of the PA Dutch area of the state.

I am a retired Professional Engineer who spent my working life in the electric utility industry. I am now a volunteer instructor at the University Nevada Las Vegas (UNLV).
View all posts by R. F. →
This entry was posted in Allentown, Vestal and tagged job change, Marge, memoir, moving, Raquel Welch Poster. Bookmark the permalink.