There was a song in the 1960’s “A house is not a home”  The lyrics then go on to  say that someone to love makes it a home. We certainly had love, but not a house.  We had been house hunting for from September to November 1969.  Our sales guy showed us a lot of houses but none of them seemed just right for a home. It was obvious that, picturesque as the farmhouse was, neither it or the Kutztown area were what we wanted.  We had lived in many apartments, rental houses, even stayed with Marge’s mother for a while, but none of these were home.  Just places to live for a while.

Vestal was our first house and we changed it into our home, our first.  I checked recently and found it was built in 1920 so it was 45 years old when we bought it.  Older than I thought. It would not have worked except that in the interval 1920-1965, a 3 room + bath dormer was  added and this made it quite livable.  The kitchen was a bit dated so we renovated it, including a genuine cast iron Kohler  dark red porcelain finish sink.  Marge loved it and we repeated this feature on other houses as long as Kohler made it.

What we wanted was a spacious, but not huge house, preferably near Allentown, in a good school district for the children, and preferably in at least a relatively new subdivision, with neighbors something like ourselves, that is middle class professionals or business people that we could relate to as neighbors.  This says nothing negative about Kutztown, but the place, neighbors, and town were obviously of a somewhat different culture.  so, we learned from that. 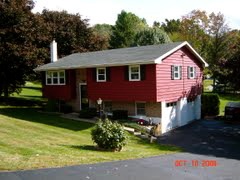 It so happened that this time, as was the case in Vestal, I found a place that looked good in the For Sale part of the Allentown paper. It was a FISBO, but I drove around and looked at it and it seemed a very good fit, looking from the outside.  I called our agent, told him about the house and ad and asked if he could get us a viewing, which he did. The house, and its neighbor were built on spec as show houses for a proposed development.  the paper advertised it for sale at $32,000, 5% down and 5% financing at I think a Savings and Loan in Wilkes Barre. I don’t know if S&Ls still exist but they did then and were popular.  The house above is somewhat like ours.  Ours was better in that it was brick and this one looks like two halves of a pre-fab, but it is the best I could do for something similar. I think all of us went to see the new house, as soon as we could in daylight.  The house was a brick rancher built into the Beverly hill in Coopersburg, PA road on a .5 acre lot.  The road level featured a 2 car drive in garage with the rest of the basement storage area, utility room, etc.  The upper level had 4 bedrooms, 2.5 baths, a small but useful kitchen, decent dining room and a large living room in front, including a bay window, and a similar sized room in the rear, called a family room then and included a fireplace.  The Vestal home had one and we enjoyed it and were delighted to find one in this house as well. The demographics were good as was the local school district. The only negative was that the lawn had not been put in.  The financing was doable so we did not quibble but made an offer on the terms listed in the ad.

The man who advertised the house, I think his name was Norbert Weiner, and the money man behind the proposed development was a guy who had made money making cabinets,don’t know his name.

The money guy would visit the house under construction and if he didn’t like some feature, he had it torn out and redone, several time in several places in the interior.  The house was laid out well in the end, but the total construction costs, I found out later, had run to about $40,000, considerably more than it was worth.  The partners decided to quit the development deal and sell both the house we bought as well as the neighboring one, which was a 2 story.

Weiner, in my opinion was a shyster and he invited me to see him in his office, which was quite near where I worked to verbally talk about a possible counter offer.  Sounded strange and it was.  He was not going to back down from the terms he himself had publicly advertised but he wanted to wiggle the figures around and give me some sort of credit to make the sales look like $40,000.  this looked so fishy to me that it smelled and I said I would think about it and we could all get together soon in my lawyer’s office.  When I got back to my office, I called my lawyer told him about the shaky verbal proposal and asked him to set up a visit at the lawyer’s office.

For those of you who live in different parts of the country, a digression on the closing rules in the East and the West.  In NY and PA the closing ceremony would involve both parties getting together around a conference table going over the documents and signing as required.  both buyer and seller were there, with their lawyers. In the West, it is more casual.  The closing is basically done by what is called here Title Companies.  They do the title search and make money from selling the buyer title insurance.  I really felt more comfortable in the East knowing that I had a lawyer looking out for my interests, as well as the title search, and I still do.

So, with that backdrop the three of us met and Weiner did his smoke and mirrors act. My lawyer politely told him that his client, the Frantzens, had made an offer that exactly corresponded to his public advertisement for the property and he strongly advised me against Weiner’s as yet only verbal counter offer.  That sealed it, Weiner could not back down he accepted the offer, I made the down payment to bind the deal,  and we set a closing date for the end of December. However the weather in Allentown then was very snowy and bad causing the closing being put off for about 10 days.  Not desirable, but we got it done.

We moved in shortly after closing and it was still cold Jan. weather.   The move took longer than expected and when finally completed, Marge got some emergency dinner ready, franks and beans and water based instant cocoa as I recall.  It was hot food, it was in our new home and it felt great to all of us.

During the walk through, we did make note of some things that should be taken care of and Weiner duly noted them.  Nothing happened though and I called my lawyer to complain. He did some research on the records and as I recall told me in a day or two that there was about $8000 of judgements ahead of me and in his mind was not worth a legal fight. Live and learn. At least we had a clear title and owned the house and our new home. That was what counted, let Weiner take are of his own problems.

That started a new and important phase in our family’s life.  More on that later.  Below is a snapshot of  Marge in our kitchen around 1979. It is hard for me to imagine that this house is now 45 years old, as was our first home in Vestal.

I am a retired Professional Engineer who spent my working life in the electric utility industry. I am now a volunteer instructor at the University Nevada Las Vegas (UNLV).
View all posts by R. F. →
This entry was posted in Allentown and tagged coopersburg, Home buying, Marge, memoir, moving, Pennsylvania. Bookmark the permalink.