Here I am, in 1954, at Syracuse University, a green as grass Freshman.  How did you feel, hope for, etc. when you started?  How did I get here where the student population alone is greater than that of my home county in NY? I may have answered this before. Just if I didn’t, a quick review.

I completed high school in the village of Dannemora, NY, in the extreme northeast corner of the state.  The high school was truly “itty bitty teeny weeny” with a total population including all classes of 130 at most. In 1954 the State held its annual exam for any seniors who wanted to take part.  The test was similar to the SAT exam of that time.  Any winners would receive an academic scholarship good at any college in the state. I, and another class mate, won 2 of the 10 scholarships awarded in our county.  Itty bitty, for me meant very small upper level math classes.  Almost tutoring.  This started me on my journey into Science, Technology, Engineering and Mathematics.

Shortly after I received my notification from the State, I received  a letter from Syracuse University offering to match the state scholarship in an amount to cover full tuition. The only need for me was maintaining an overall average of C+.  My fondest wish; granted.  I still remember showing the letter to my Dad.  The one and only time in my life, he gave me a big bear hug.  I still remember this,  it was quite unusual for him, he was not very demonstrative.  He did what he could and this was a big day for him too.

Dad and I went to Syracuse to have a visit with the Dean of the Engineering college.  It went very well and the Dean truly seemed interested in having me enroll there.  I was SO happy.  There were many excellent Engineering colleges  in  NY, but limited to engineering only.

Clarkson College of Engineering (now Clarkson University) accepted me and offered to put me on the wait list for a full scholarship. Big deal!  Furthermore, it is in Potsdam, NY, in upstate NY. I lived upstate long enough, thank you. Syracuse had many colleges and many more opportunities to explore other courses, or even different colleges.  Just what I wanted!! So, my search for education can stated as wishing to optimize my opportunities, while minimizing my risks.  More simply, who offers me the best deal?  Very logical, as Spock would say, had he been around then.

Summer passes working in another restaurant. Finally, September comes and my Mom and Dad drive me to school. I believe my sister Karen, came along as well, this is a big day for them also.  My Dad wasn’t able to finish High School due to the premature death of his father.  Mom went to what is now Kent University so she could teach elementary school.  A century ago, this was a one year program named Normal School.  Both parents actively encouraged my sister and I to aspire to  a college degree.

I wish I had a picture of the day I arrived, but I don’t, or can’t find it.  It is a blur in my mind.  I do remember that my Mom took me shopping in Plattsburg before we left so I would have some new clothes.  I do remember getting much information from S.U. as well as a lots of ads about places to shop, what was fashionable, etc.  I think we did a good job of shopping and I did not look like the up-country hick that in fact, I was.

I did receive, as I imagine all incoming students did, literature informing me where I was to live, who my new roommate was, etc.  Where was I going to live?  Watson Dormitory for Men, a brand new facility for new students.  I believe that before this, the University had some converted WWII quonset type buildings used as dorms. Fortunately, they are ancient history.  I did check Google and here is the information I found about Watson: 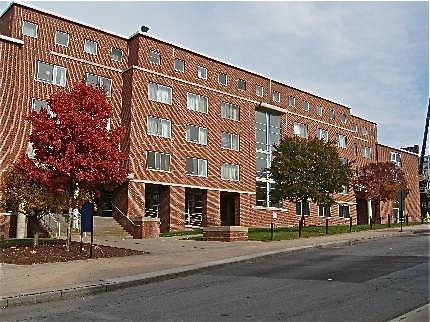 In 1954, University furnished dining was mandatory.  At that time, Watson had a cafeteria on the ground floor.  At enrollment we received a dining card good for 20 meals a week.  We duly lined up every day, got our card punched, and got the meal du jour, whatever it was. Sunday was our day of some choice.  As I recall, they served breakfast and lunch, no dinner, so we were on our own for that.

Isn’t it amazing that this structure still stands after over 60 years?  It appears to have some changes made, but basically the same. It is probably now co-ed.  Another amazing occurrence is the selection of roommates.  The technology of the day was 80 column cards used in IBM accounting machines.  I presume that as much of our vital statistics as possible was crammed into one card per person.  Then, with some unknown programming technology of the day, we were paired off into roommates.  My new mate was Roy Bates, whose home was in the nearby hamlet of Port Byron, NY.  We had a variety of fellow residents, many of them Korean War veterans.  NYC was well represented, as were other areas of the  state, and even Canada.

In many ways were similar, and when we differed, we always came up with an amicable solution.  We were both from small towns, each of us recipients of S.U. academic scholarships, and were from middle class homes.  In September of 1954, I was 17 and Roy was 16.  I was young for college as I started first grade when I was four years old.  We had no kindergarten where I lived.  Roy was quite bright and had skipped a grade, 4th or 5th, something like that.

I can’t find my SAT record, and neither can SAT services, as I had them do a search.  I am quite sure it was around 1250 when the average of college bound students was 1000.  I think Roy had a similar score.  So, I don’t think either of was to win a Nobel prize but we were able to compete academically.  Roy and I are still good friends and keep in touch by phone and Internet.  Neither of us do as much travelling as we once did because the aches, pains,  and minor malfunctions of aging are catching up with us.

Our first week,   with plenty of orientation stuff, mixers, a trip to the Archbold Stadium (now gone) to witness a football practice and do our freshman chant.  “We’re the class of  ’58, we’re the ones that really rate!”   Still can’t get it out of my mind.  And, almost forgot, a “Frosh Beanie.” I felt like a fool wearing it but I did for a bit, then to Hell with it.

Engineering college orientation  was a strong dose of reality.  I still remember all of us, maybe 150 then, being told to stand up, look at the person to our right, then the person to our left and return facing the speaker.  His remark was “Next year at this time there will only be two instead of the present three.”  Wow, that was a chiller, but true as it turned out.

Freshman Engineering called for 20 credit hours the first term and 19 the second. No choices whatsoever.  No wimpy 16 or 17 credits and take 5 or more years to finish. Just do it, take it like a man.  I say this not as a sexist, just stating a fact of the times.  Our Engineering class had two women out of the maybe 150 students.  One was quite good-looking and in the Industrial Engineering department as was I.  Her name was Margaret “Peggy” and the professors always made certain that if she was in a class of theirs,  they made sure they had a good haircut, neat clothes, etc.  This fact was noticed by the faculty wives as we got to know some of them in our later years.  The other female was in Chemical Engineering and other than that I remember nothing of her.

Do you remember those period movies of WWI where the troops  huddled miserably in their trenches? Then the Lieutenant shouted “Over the top men?”  Of course, most of them, including the newly minted 2nd “Looey”  churned into bloody mince meat. That is a good analogy to  Calculus 1.

A large number of my class had absolutely no idea what was going on. My class instructor was a middle-aged Swedish woman. Helga Fischer-Colbry I think was her name. Quite nice and knowledgeable but not quite comfortable with colloquial English. When she had to discuss something rotational she would say “Like a watch, yes?” Clockwise to us.   Many classmates dropped out of Calculus and took remedial math which counted for nothing really, but it may have helped some.

I, however, understood.  My last year in High School featured cramming as many math classes as I could take to prepare me for this moment.  Our advanced algebra class covered many of the topics as beginning calculus did.  I ended up with a final grade of an A in that course.  I ended up with an overall average of B for the semester.  That was due to a C in Freshman English.  That was a crappy course, taught by a crappy instructor.  I actually liked English in High School but this course turned me against the subject. I rarely read literature even today; history, biography, philosophy yes, but not literature.  I guess that makes me illiterate.  So be it.

How great I felt!!! I did it and could keep on doing it.  That is, getting at least good grades and competing with some quite cosmopolitan students from NYC.  I had to study all the time as many of the courses had labs included.  About the only time to keep up with assignments was after dinner.  I was in the band in High School and enjoyed playing cornet in that.  I considered keeping that up in college, but there was no time, no way.  Same thing being associated with the campus radio station. No time for extra-curricular activities.  However, I did not regard this as a personal loss.  I valued then, and I value now my independence and privacy.

It dawned on me that my relationship with Syracuse University was in the nature of a business deal.  The University’s part of the deal was to “pay” me in the way of free tuition.  My part was to keep up at least a C+ average and so do my part in raising the academic level of the student body. I showed the potential of doing this by winning a NY academic scholarship and getting an SAT of at least 250 points above the mean of the run of the mill entering student. My freshman year proved I could hold up my end of the deal.  I had no school spirit, so-called, did not want to join a fraternity, socialize and make contacts.  That was not part of the deal so I did what I was there for, had no regrets then, nor do I now.

I left 1954-55 feeling quite satisfied.  I finished the school year with good grades and maintained my scholarship.  I actually looked forward to summer vacation in the Adirondack Mountains working as a resort cook.  Life had been good.  It still is.  My regret is that Marge is not here with me continuing to enjoy the goodness of life.

I am a retired Professional Engineer who spent my working life in the electric utility industry. I am now a volunteer instructor at the University Nevada Las Vegas (UNLV).
View all posts by R. F. →
This entry was posted in Dannemora, NY, Syracuse, Syracuse University and tagged Calculus, Engineering College, Freshman, New York, roommate, STEM, students, Syracuse University, Watson Dormitory. Bookmark the permalink.

4 Responses to Ages and Stages-Class of 1958