Hedwig Cmielewski and I, in the summer of ’57 worked at Saranac Inn, NY.   This place appeared in the last post so no sense in repeating that.  I was back in my old department at Saranac Inn and this year there was a girl who was not employed at the Inn the last year.  Her name was Hedwig Cmielewski and she was in the same class, 1959, as I was though in a different college at Syracuse University.  She was in the Fine Arts College and I was in Engineering. We had a very casual relationship there, just friends who went to the same University.  I don’t have much information on Hedy, as she was known,  but will share what I have.

Hedy lived in Haft Dormitory. It was situated at 795 Ostrom Avenue and the building is known today as Haft Hall. Here is some information from Syracuse Archives.

Until 1992 the two story building was a co-operative living center housing 26 women responsible for their own food preparation, and cleaning and maintaining the building. In the basement were a recreation area, laundry and drying room, storage area, and toilet facilities. The first floor held a living room, dining room, kitchen and two double bedrooms, while the second floor contained ten double and two single bedrooms.

Morris Haft was a retired New York clothing executive. The Hafts also donated living room furnishings in honor of his deceased brother and sister-in-law, Dr. and Mrs. Henry H. Haft. Dr. Haft had graduated from the College of Forestry in 1913 and the College of Medicine in 1917 and was a member of the medical faculty from 1917 to 1941.

In the fall of 1992 Sigma Kappa sorority rented the building from the University as a residence for their members. A complete renovation of the building in 2003 created the new home for the offices and studios of WAER, SU’s public radio station.

Hedy graduated from Linden High School class of 1954 in Linden, New Jersey  She was listed in the yearbook “Cynasure” as a violin virtuoso.  This was news to me as I never heard her play the violin, or even speak of it.  In college, Hedy was a member of the Syracuse University Outing Club Outing club (SUOC) and here is a yearbook photo in that group with her in the left. To me, this is not a very good picture of Hedy. The glasses were the style for women in that age, but I don’t think they flatter her, and she is not wearing them in the next photo.

The club had a reunion in 2010 and I have included an image from their site. 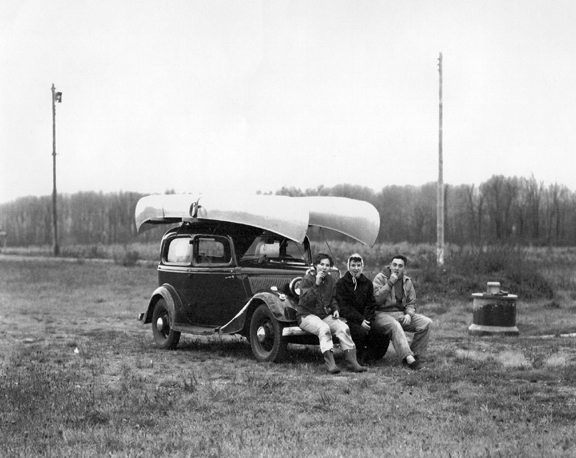 That is definitely her in an outing in 1957, the car was already ancient.  Hedy had long legs which made her very attractive, sorry I don’t have a closer full body image of her. She is sitting at the left front bumper.  I do have her yearbook photo which follows:

This is a scanned photo from my yearbook, poor quality, but best I could get as I could not get a PDF file of the yearbook. At that time, her home was Lakewood, NJ

In 1959 Hedy as listed as president of the club.  Here is a You TUBE of the club as it is today, much the same concept as it was decades ago. I think this is from Facebook.

I could not find an unmodified ’34 ford in YOU TUBE as it was a popular vehicle for chopping, channelling and otherwise converting into a hot rod or rat rod of some sort, and those are the one shown on the videos I saw, so I did the best I could with what was available and illustrate an unmodified, though different style ’34 Ford.

At Saranac Inn, there was an area outside the entrance to the kitchen.  After finishing a meal, it was common for the cooks to gather there for a smoke, relax and socialize a bit.  Occasionally we would have a visit from Hedy.  By this time, she had changed from her uniform and, since it was summer, wore a blouse and shorts.  Very stylish, and very short shorts.  A smile and a little chat and she let it slip out that she needed more lipstick, or something similar.  Almost instantly, a half-dozen middle-aged, and then some, cooks would be digging into their pocket for their car keys.  The lucky one lent his car to Hedy, and with a beaming smile, off she went.

We really did not have a lot in common, she was Polish, Catholic I think and I was a more or less uncommitted Scandinavian.  She was fine Arts, me engineering. Her extra-curricular passion was the Outing Club.  I had enough outdoors growing up in the Adirondacks.  That fact was a big reason in attending an urban university.

At Syracuse, Hedy lived in a female dorm, a mile to the east of where I was. We did date now and then, maybe just breakfast or a snack at a student diner and occasionally on a date to a movie. When she got dressed up, she was a knockout, and she knew it. Eye candy really, though the photos do not show that. Hedy was a charmer, and could be quite charming. Candy once in a while is a very pleasant treat, but not 24/7.

Also, SUOC enjoyed visiting caves.  There were a lot of limestone caves in the Syracuse area, so plenty to do.  I get claustrophobia in close quarters and would never go into a cave.  I think during that period one of the group died in an unfortunate accident as part of the group activity.  No way for me.  So, we drifted apart, I started dating Marge and the rest is history.

So, I do wonder what happened to Hedy in all these years.  She was majoring in art education.  My best guess is that she moved back to Lakewood, NJ, got a teaching job, probably married because (1) that was what girls did then and (2) I am sure there were many applicants for the job.  Still the story might have been quite different.  At any rate, no hits from Google searches and I do wonder whatever happened to her.  We did like each other ( small “L”)  but the relationship was not going anywhere.

Backing up a bit to Saranac Inn:  Business slowed down and some people had to be let go.  Since I was on salary, not tip dependent, I was  on the list.  However, the Executive Chef,  “Dutch” Susssey had taken a liking to me and found a job for me at a smaller resort, Lake Placid Inn, which was really on Lake Placid.  The village with that name is on Lake Clear,

Dutch told me about the opening and asked me if I wanted the job as it would only be for about 4 weeks at most.  It was as I had no alternative and Dutch drove me over one afternoon to introduce me to their chef.  We got along OK and I started next day.  I think Dutch drove me over again.  Dutch was a good sort, a real hands on manager who knew everybody and everything about his kitchen.

So, I now was the head cook in a one man department.  By that time, I did know a lot of the basic stuff and on occasion if I got stuck on how to prepare a menu item, either the chef, or the sous chef would show me how.  So, I made it through the summer.

I think that the Lake Placid Inn might have undergone some sort of change.  The cooks all slept in what was once the caddy shack.  I don’t think there were any caddys, but there was a golf course.  The building itself was made of quite rough-hewn stone.  It had a large central room with each single room along the sides and to the rear.  The central room had a large impressive fireplace and after the dinner meal was over we would go back to the caddy shack, start the biggest fire we could, drink some beer, then off to bed as we wished.  The sous chef had a 1941 Chevrolet which ran OK and we would leave in that.  I did not have to work breakfast, so I would generally walk to the Inn a bit after the others. It might have been a mile walk, not bad and certainly a waker-upper for me.  Even in mid August, it was so cold then that I could see my breath condense on the way to work.

The kitchen did have two African-Americans.  One was the butcher, and occasionally I would be sent to help him.  He was quite a character and had a flow of stories to tell and I enjoyed his company.  The salad man was the other.  I never really got to know him and perhaps there was some segregation, perhaps just a matter of personal choice.  I never really thought about that.  I was just short terming it until mid September when it was time to go back to school.

After I completed the 1957-58 school year, I obtained my  A.B. degree from the College of Liberal Arts.  I didn’t bother to go to the graduation ceremony since I still had a year to go before I finished the last year of my 5 year dual degree program.

I am a retired Professional Engineer who spent my working life in the electric utility industry. I am now a volunteer instructor at the University Nevada Las Vegas (UNLV).
View all posts by R. F. →
This entry was posted in NY, Summer vacations, Syracuse University and tagged college, cooking, dating in 1950s, Ford, friends, memoir, New York, resort life, students, SUOC, Syracuse University. Bookmark the permalink.