The Meaning of a Classic

Early Fall had arrived to Syracuse in September 1957.  Roy and I had settled in to our room at the Infirmary, and were walking  on a Friday evening. We had left the infirmary on  Waverly, walked east and turned south on Walnut Ave, toward the University campus.  While walking, I noticed a For Sale sign on a car in a parking lot at University Place and Walnut.  A fraternity house was located on that corner, I don’t recall the name as I didn’t pay attention to fraternities.

I was attracted to the car and said to Roy ” Lets go over and take a look.”    The car was a 1938 Buick Special 46c Phaeton.The color was dark red, maroon as was the common name for this color long ago.  I searched for a photo to show you and this is what I came up with.  It is from an ad by a convertible top company, Topsonline.com. Personally, I think the car shown below is a 1939 model, not 1938 as the ad states, but they were very close in appearance. 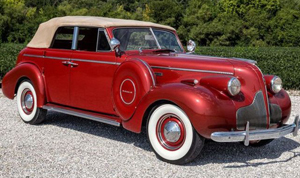 I fell in love with the car.  This model was seldom seen and the owner, George Rodormer was asking $200 for it. Quite reasonable.  I asked if he would take a check and he agreed so I went back to the Infirmary and wrote a check and gave it to George.  I told him I wanted to drive it off and asked if he would leave his plates on for me until I could get the paperwork done for insurance and new plates.  He was agreeable to this,  though it was not a very legal arrangement.

I had a NY Learner’s permit then but no driver’s license.  Roy had a license so we got in and I drove it to his home in Port Byron, NY.

So, what was the meaning of this transaction?  For that matter, what is the meaning of anything.  For example, a $10 bill is just a piece of paper with words  and an engraving of Hamilton on it.  It has no intrinsic value, unlike gold which does.  It is a medium of exchange, and the holder can exchange it for $10 worth of goods and/or services.  Pretty dry stuff isn’t it?

Let’s take this a bit further.  What is the psychological meaning, or feeling that having this $10 means?  Of course, this varies immensely depending on the situation and the person.   If you were broke, the $10 could mean food to eat, clothing to replace worn out rags and enjoying an improved sense of well-being.  In 1957 $10 could also mean the ability to take a girl out, have a nice dinner, see a movie, and possibly some romance to top the evening off.

How about the car? That’s the point of all this.  Like many young men, I had an interest in cars since an early age.  I prided myself in being able to name the year, make, model, etc. of any car I saw.  Now I was the proud owner of a fairly rare car that was beautiful to me.  So, I felt pride of ownership, and a feeling of personal freedom, not having to rely on public transit.

I could also fantasize a chase scene in a Noir film.  I would be at the wheel with pedal to the metal, engine roaring and tires screaming.  Edward G. Robinson types would be leaning out windows with revolvers blazing, and other gangsters after us similarly occupied.  Two buddies blazing away with 45s.  Deafening noise.  Then…the sound of a crash, and a glance in the rear view mirror shows our adversaries crashing over an embankment.  “Good shot Eddie, time to really move along.”  Sure.

Saturday I drove around with Roy and some of his buddies.  Great fun and with gas at about $.25 a gallon not too expensive.   I looked at YOU TUBE now and did find a short video of a 38 Buick 4 door convertible being driven off a car lot in 2012.  This is definitely a 1938 as can be differentiated by the grill.  Also the headlights were not faired in to the front end as they are in the image above.  I hope this video and the photo give some idea of the car I briefly owned.

Briefly?  Why so?  It’s like this:  After a pleasant afternoon of driving around country roads, we took Roy’s buddies home and drove back to his house.  Nice dinner and time with his family.  I really felt at home there.  Sunday though we had to hurry back to the Infirmary as we had chores to do before it opened on Monday.

I still wanted to drive around a little and by dusk, had invited another friend with a license to drive around the Syracuse area.  That was fun and we were getting hungry.  It was nearly 8:00 p.m. We saw a Howard Johnson’s in the DeWitt area and pulled in.  We had a decent meal, probably the day’s special.  Then, back to the Buick for a drive home.

Then, Oh, Oh, you probably saw this coming.  The Buick would NOT start, no way.  I went back in to the restaurant, talked with the manager and told him my problem.  I said I would be back next day to take care of it in the daylight.  He agreed, but told me if I didn’t, he was having it towed.  Then, with a couple of bus changes, we got back to the University.  What a day!

Next morning, Roy and I took the bus route back to the restaurant with the dead Buick.  With the help from somebody, I think it was the manager who wanted to be sure we left, we able to get a push start and away we went.

When we arrived at the University, I drove back to the fraternity, parked the car about where we found it and asked for George.  Fortunately he was in at that time. I told him, politely but firmly, that the car did not run properly and I wanted to back out of the deal.  George was very reasonable.  We went outside and he checked the Buick over for damage. There was none, just maybe 100 more miles on the odometer. I returned his keys, George got in and tried to start.  DOA again. George returned my check as he had not deposited it yet.  He was more than decent about all this, though my backup plan was to go to my bank and put a stop order on my check, my Plan B.

I think, though I’ll never know, that the starter failed.  Starter relays were not universal yet, and the starter was engaged manually by pressing a large spring loaded pedal above the accelerator which engaged the starter gear with the flywheel. With the ignition on,  the starter would turn and the car would start. You had to quickly take your foot off the starter pedal as the next step. The spring would pull the starter away from the flywheel and that was it. A simple but reliable mechanical solution in design.

So, obviously not a failed relay, there wasn’t one. It had to be the starter.  It is not difficult to change a starter.  You detach the wires, unbolt the old one, remove the starter and bolt a new one on, tighten up and back in business. However, I had no tools, no place to work, and I knew next to nothing about car repair mechanics.

Sic transit gloria, For a brief period, I owned a great classic car.  Really, I would like to have it back today.  But I have no place to put it and the cost would be in 6 figures for a nicely restored car, or the cost to restore a car almost as old as I am.  I do own a very nice 1967 Mustang coupé, get compliments and comments from complete strangers. Still, of all the cars I have owned, I really liked the Buick best. The feature I liked best was the spares with their metal covers in the front fender wheel wells.

I am an engineer, not a writer, and certainly not a poet.  During a chance event, I noticed the Buick and that it was available.  I immediately bought it, and it was mine for a few days.  This action was unusual for me, no analysis, internal debate, considering alternatives etc. I just reacted.

We had some adventures, good times, and even fantasies. It soon became clear that this was not meant to be a long-term relationship.  We had to go our own ways and now only memories remain. As my life moved along, I realized that  events, this time with people, could be very similar.

The Buick meant a lot to me, more than I can articulate. I will subtitle this post “My love affair with a Buick.”

I am a retired Professional Engineer who spent my working life in the electric utility industry. I am now a volunteer instructor at the University Nevada Las Vegas (UNLV).
View all posts by R. F. →
This entry was posted in Syracuse, Syracuse University and tagged Buick, driving, emotions, fantasy, friends, memoir, New York, relationships, road travel, students, Syracuse University. Bookmark the permalink.

4 Responses to The Meaning of a Classic