I have rambled  about myself with little concerning Marge. Now I try to remedy that as best I can. This is a copy of the cover letter Marge sent me after, what I thought, was a disastrous first real date, the disaster due entirely to me. She had stapled to it a hand typed copy of “DOWN WITH PIGEONS” written by a humorist, Robert Benchley. The letter is old and wrinkled, but then so is the author of this post. 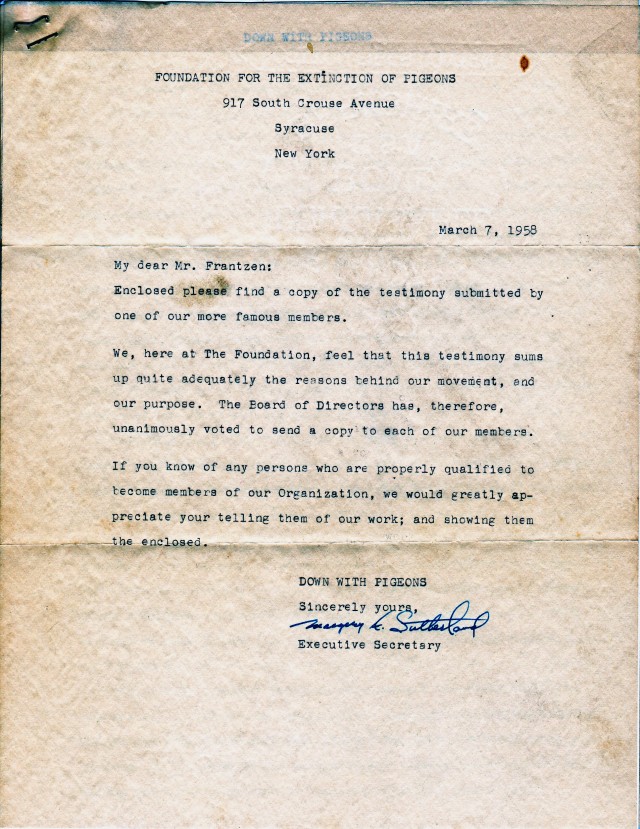 Marge’s letter to me, was saying “Silly man, I really enjoyed going downtown on our date to see Cinerama.  Let’s get together again soon.”  I hadn’t blown it and I was not going to let her implied invitation go unanswered. Now I include my response, written in the same stiff formal prose as her  letter.

Do these letters seem to you a strange way to begin a lasting relationship between a boy and a girl? They certainly do not read like typical love letters, but they were. It is certainly not the “Across the crowded room” and bingo!, nor the wham-bang-alakazam instant rush of recognition. Marge had a “quirky” sense of humor that I valued and enjoyed. We started to see each other often as well as call on the phone.

On April 21, I called her around 9:00 p.m. and we just chatted for a while and I said good-bye in about 5 minutes. Then, surprising me, in another 5 minutes Marge called me and said she wanted to see  and talk to me. Naturally, I drove the Plymouth around to pick her up. She had taken a 12:00 leave from the house-mother and we just drove around. We talked for a while, parked for a while and talked some more. I don’t remember the specifics, but like peeling an onion, we were throwing away the useless  outer layers.

Please don’t think that my memory is so precise as to exact times. I do remember the event very generally and I have a letter Marge wrote to her Mom about this. Since this site is about both of us, I think it will be OK to quote some of Marge’s April 21, 1958 letter to her Mom:

…I realize it doesn’t sound quite right; but Mom, I came in at 11:45; I was with him less than two hours; and I am full of peace;  We came to no momentous decisions; nothing was decided, and yet I am full of that lovely quiet peace!

I want to tell you how wonderful it is, and I cannot. I cannot tell you what happened – it is kind of like some wondrous secret that must be kept.

I can only tell you this – my eyes feel like they are glowing, and my mouth is in a small, quiet smile; and inside there is a very wonderful knowingness that everything is right.”

I cannot come anywhere close to Marge’s ability expressing herself in words, but I want to give you a spacial reference to the addresses shown.  I have already written plenty about the Infirmary, but nothing really about where Marge lived, Wilson Cottage on South Crouse Street. Here is a map showing the approximate relationships of our two residences. Marge lived right around the corner from me.

Map of Syracuse University in 1958

I did access the S. U. Archives and did find a little information on the Cottages, as S.U. called them.  I include that below. The buildings are in the Victorian style,  once private residences. Probably for University teachers and staff people. I am thankful that the Archives have at least this much information, they have been helpful but I can’t specifically identify Wilson. The photo was originally a postcard taken in the early 20th century.  Time and copying has dimmed the contrast of this photo so I have warmed it up a bit with a sepia tint. Imagine any of the three houses as being Wilson, you might just be correct. 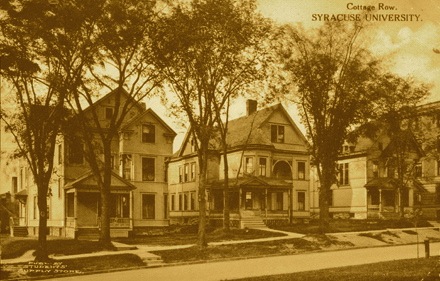 I do have one photo of Marge and I at Wilson.  The occasion was the Engineers Ball dinner at the Brae Lock Inn in Cazenovia, NY, about 35 minutes away.   In February I was elected into the Alpha Pi Mu chapter of the Industrial Engineering honorary society, Pi Alpha Mu.  The Ball included recognition of new members.  Of course, I invited Marge to go with me. Marge had a Kodak Duraflex reflex camera and she had another girl take our photo. The photo’s date is May 10, 1958.  I am the guy looking like a deer caught in the headlights.

Marge and I on our way to the Engineer’s Ball

Marge saved another photo from the same film roll.  I don’t know exactly where this photo was taken,  but I have so few photos from that time, I include it.

Marge had good reason being cautious.  Her parent’s marriage ended the prior year and, as I wrote before, at about her age of 10, she decided that no men were trustworthy based on her father. During High School and her Freshman year at Syracuse, boys and men had drifted in and then after a while, drifted out of her life. I knew extremely little about her past nor her resulting emotions.   Possibly, had I, I would have been more understanding of her temperamental moods.

I was not then, nor am I  now an expert on understanding women. I dated some, and had summer romances in the resorts where I worked. Those were pleasant experiences, but in no way special.

I understood that I did not want to lose Marge, she was definitely special and I was not going to drift away.  We were falling in love, a new experience for both of us.  In our future we experienced ups, downs and in-betweens, misunderstandings, doubts, and  other negatives, as do many couples.

Through the decades of our couplehood,   we  really belonged together.