Music – A Metaphor for Life 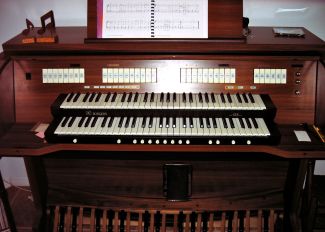 On Dec. 13, 2013, the Nathan Adelson hospice in Las Vegas held a “light up a life” memorial for patients who had died in the previous year or 2, my late wife, Margery, who died from cancer, was one of the honorees.  During the ceremony,Greg, a guitarist played a piece written by J. S.  Bach.  The title was not provided in the program, so I can’t give it to you.  Before he started playing the composition he gave a little talk about it and music in general.  The point that I remember from this was his statement that “every note has a purpose”  This has stuck with me and I want to elaborate on this.

Margery and I were both amateur musicians.  She had a strong trained alto voice and loved to sing in choirs, choral groups, and sing solos, accompanied or alone.  She did study piano and organ for a short time in college, and could play a few pieces she liked, but was not systematic about keeping up instrumental studies.

I took a year of fundamental music theory in high school, and was drafted into the High School marching band playing second cornet.  I enjoyed this and audited a couple of music courses at Syracuse University.  Much later, when my first daughter, Ingrid, was about 5 years old we started her on piano lessons.  I took her to the teacher, and after her first lesson cautiously asked if it was too late to study piano myself. Not at all!!  So I began an adult beginners lesson series, and have continued taking individual and group lessons on and off ever since.  I belong to the AGO (American Guild of Organists), can read music and sing bass and have been in several choirs, and choral societies, often with Marge.

So, we have both enjoyed and appreciated music, and did so with the best of the abilities and knowledge that we had.  I understand the basics of music theory and keyboard technique but am at best a one-footed organist, as my pastor once described an organist we auditioned.  The notion that every note having a purpose intrigued me and I have a few thoughts to share.

Well, it can be a single note by itself, or a portion of an interval or a chord with other notes.  So, notes can be solitary as in a solo, or part of a social group as in a song with chords.  A lot like life in general.  They take energy to produce, by singing a note,  blowing into a horn, plucking a string on a guitar, etc. The note comes to life, sustains itself from the energy put into it, and than dies away when it makes way for a new note, or the ending of the composition.  Again, like  our own lives. Where does the note go after it dies away, slowly or abruptly?  Does it go to a note heaven to join with all the past bygone notes, or does its energy just dissipate as easily explained by the physics of sound?

Bart Ehrman wrote a book “Lost Christianities”.   In it he writes a bit about many ancient texts discovered around 1945.  One has been called “The Infancy Gospel of Jesus.”   The book seems to me, not really a Gospel but a book of ancient  early Christian children’s stories.  One of these stories features Jesus about 5 years old playing in a mud puddle and has made 12  mud clay swallows  on the Sabbath.  This is forbidden work, and when notified, Joseph comes to chastise him.  Little Jesus then waves his hands at the swallows, says “Begone” and they flutter and twitter away. They have fulfilled their purpose and fluttered away. Case dismissed.  I add all this because I love the visual imagery. I can see it.  Perhaps that is what musical notes do when ended, they just twitter and fly away.  Could we do the same ? Maybe.

Could we, as people, live without notes and music?  Well, yes we could, but the quality of this life would be much less than it is with music, look at the success of iTunes, for example.  A note in a piece of music can serve many purposes, depending on the compose, performer, and circumstances.  I share an anecdote told me by Ray, a former organist at Reformation Lutheran where Marge and I both worshipped.  He was a long time dean of the local chapter of the   American Guild of Organists, and had an endless store of stories about his life as a musician.  This one concerns a funeral that he was hired to play the music for.  The departed was a man who loved dogs and his wife loved him.  She told Ray that she really wanted him to play the song “How Much is that Doggie in the Window?” since her husband loved dogs.  This song is a short novelty pieces about a little dog in a pet store window, written decades ago.  On the surface, the request seems ridiculous, hardly suited to the solemnity of this final farewell being held in a church to the strains of the church organ.  But Ray took the challenge seriously and by changes in the tempo, volume, organ voices, along with improvisations on the basic tune, he did what he was asked to do.  The widow was so moved by the rendition that she was awash in tears and told Ray that she had never heard a more beautiful song.  Music has that emotional power.

So, music, and that notes that comprise it can be regarded as a metaphor for human life.  Even the dynamics of musical performance can be translated into meanings in actions in our lives.  Suppose, for example that two people love each other and are making love.  If there was a musical score for this, the terminology might well be, quietly, slowly with feeling.  On another occasion the score might call for the lovemaking song to be played very loudly and very quickly. Presto, Forte Fortissimo!!Both OK. There are Italian terms for this, and they look more impressive, but that is the meaning.  Art imitates life, and life imitates art.

Marge and I met when she was 17, we started dating seriously when she was 18 and we were together until her death at almost 72, I then 75.  That’s a long time being a duet and the musical score would run to book length.  Now she is gone, I am a solo act again.  Sometimes we were in perfect harmony, sometimes very discordant, a lot of times just very basic two note intervals that any musician could play or sing.

So, in musical terminology, I hope to relate a few bars of events in our playing together, and now I as a single act.  In doing so, I hope you can connect with portions of our life together, and the purpose of all the notes of all our lives.

That  life is gone now, and in my grief, I recall my memories before they too just twitter and fly away.  Probably me as well, soon enough.  I really do believe that Marge and I had a definite purpose being together all those years. So this site is about those memories of my past and reflections on my new reality as events unfold. This is but one.

I am a retired Professional Engineer who spent my working life in the electric utility industry. I am now a volunteer instructor at the University Nevada Las Vegas (UNLV).
View all posts by R. F. →
This entry was posted in Vegas 2010 -? and tagged Colon cancer, mortality, music theory. Bookmark the permalink.

2 Responses to Music – A Metaphor for Life