Sex!! where would we be without it? Of course, you wouldn’t be at all, unless you were conceived miraculously. Christianity, Buddhism, aboriginal beliefs, and other religious systems have similar tales,  so that idea is part of our Jungian collective unconscious thereby explaining the mystery of birth and the divinity of the founder.

So, why sex?  Why don’t we just pollinate like plants? Really, I am serious.  We (and I speak for men) could perhaps just wiggle our ears, blow our noses, whatever, in the windy season and somewhere, someplace,  a receptive female receptor would snag one and start a nut, a bulb, whatever.  Does that sound like fun to you, it sure doesn’t to me, but then to some people’s disbelief, I am actually human.

In answer to the sex question, even the Judeo-Christian Bible implores us being fruitful, to multiply, to cleave to one’s wife.  If that doesn’t work, then try concubines who were, despite other chores, a form of sex slave. Said Bible does not say anything about polygamy, nor stoning men for visiting prostitutes, only women, the selfsame prostitutes driven to that trade because of sexist domination by men.  How unfair!  And birth control,  look up the story of Onan if you aren’t sure.  The so-called Old Testament has a lot of juicy stuff if you look long enough.

Speaking of enough, let’s get to a real answer.  HAVING FUN!!!.   Break the ancient rusting chains of arbitrary social constraints and so; Lovers of the world Unite, you have nothing to lose but your chains. Humans are not beholden to the Estrous Cycle so we can make love, have sex; almost when and where we wish. Truly a gift of the Gods, Cupid, Venus, Aphrodite, your choice from a few of many.  And what better place than Las Vegas where what happens here, stays here. Click on the link below for a sample of the old days:

By the way, the colloquial slang for Spring Fever was “Soak & Poke” blunt but descriptive.

Spring Fever is now long gone, here is the text from a short YOUTUBE video, and then the video:

Published on Nov 6, 2014
Only in Vegas. Catering to the “afternoon delight” crowd, Spring Fever was a business that rented out private spa rooms by the hour. Your own spa big enough for several people (although I don’t think they encouraged that), a small sauna and wooden shelf for sitting/laying/doing gymnastics. It was a very popular place, especially at lunch time which makes me suppose there were some illicit goings on there.

Hooper Productions produced this commercial for Spring Fever in 1985. It was the first TV commercial the spa had ever done even though they’d been around for a while. They really needed to advertise to a new generation.

I hope you watch the short video, but since Spring Fever is a common term, stop viewing when the video is finished or the video will continue to, I believe, a singing group of the same name.

I don’t think they were open much longer after this aired and the building was left to deteriorate and eventually burned to the ground.

So, you get a general idea of the place.  The corner of Sahara and Boulder Highway has deteriorated from what it was 30 years ago.  Spring Fever burned down with cause unknown.  There was an urban legend that there were two-way mirrors in each hot tub room and someone captured an Asian and friends frolicking on videos which were later copied and sold for next to nothing in China, or wherever there was a market.  Supposed Asian had friends here who torched the place in revenge.  Could be, however, each hot tub room had its own heater, and maintenance may have slipped; you must understand these tubs burned a lot of propane.  That alone could have caused an explosive fire.

Spring Fever did play a part in our own amorous adventures, with more of that later.  No pix though, and if I had them, the last place  they would be is on an unrestricted Internet website.

“Mr. R. F. will move slowly toward a sexual encounter, all the while giving subtle hints of his interest.  He will spend a great deal of time testing his prospective partner’s willingness and acceptability.

Once he has received sufficient assurance that the feelings are mutual, he is likely to show tenderness and commitment to his companion.  However, he would probably feel tremendously hurt by rejection or infidelity on the part of his lover.”

“You may find yourself unable to predict Ms. M. F. ‘S sexual interest on any given encounter.  She can be aloof and distant or warm and intimate,  She is changeable, preferring conventional lovemaking sometimes and new and different approaches at another.  Her mood is the key to her sexual behavior. Ms M. F, can easily be described as temperamental.  Her emotions have a greater impact on her sexuality than anything else”

Since I am cautious and deliberate in almost every aspect of my life, logic alone indicates that the sexual facet on the gemstone of my  love life should shine;  glowing gleaming , glimmering, not flaming up then burning out.  Perhaps I missed some exciting times, exciting women, at least for a while, but I am what I am and overall it suits me.

One short story about Marge and me:  Once early in the evening, Marge asked ” Have you heard about Spring Fever?” Of course I had, heard of, but not experienced being there. So, my reply was something like “Sure, what about it?” and her response “Let’s go there now.” I called ahead and assured that if I came now, they would hold a room for us, and so we went.

This was a first, but not a last visit to Spring Fever, and quite unlike Marge to start this encounter.  I hope you clicked the link and watched the short video. Neither really does justice.  The room was very clean, the water hot and bubbling, and as the text above said, there was a bench for sitting/laying/doing gymnastics.  And so we did all the above as well as enjoy the tub.  Once we had to hurry down without eating dinner, so we stopped at a Subway for some sandwiches and bottled water. A hot tub picnic, very nice really, such pleasant memories.

So much for the past for me, what about the present, possibly the future? In Las Vegas, I have gone out a few times with a very nice woman, about my age, and I have spent some time with her at her home.  I have attended a class, by chance sitting next to an attractive woman maybe in her 60s, who on her initiative, arranged for me to do volunteer work at her office.  So, I feel satisfied that despite my age, I still have something to offer and interest in a relationship.

Marge did leave some results of a test that referenced psychological standard terms and some observations touching on sex follow;  I find the writing quite passively voiced but here is what she left:

She may express a great deal of anger towards men.  Impulsive, inappropriate expression of sexual conflicts may be reported. The client has difficulties expressing anger in a modulated, assertive way and becomes passive-agressive and manipulative in heterosexual relationships, masochistically provoking men to “mistreat” her. The client does not appear to be attracted to one’s own sex, and is comfortable talking about sex.

The Mind Prober quite concisely dervied quite accurate descriptions of our individual and joint sexuality.  One issue not touched on hs her weight and appearance. The image of her below must be about 50 years old, and retouched as best I could, but I think it presents her well as a young woman. 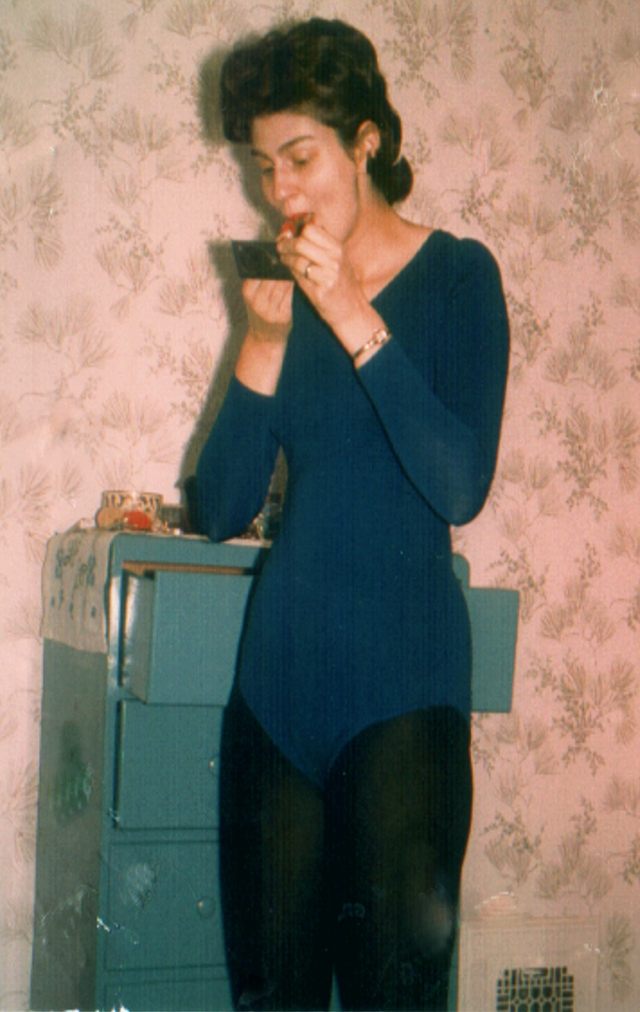 Marge was almost 5’11”, tall and leggy. I think she weighed a bit over 150# then, which was right for her height and general figure. In my opinion, she looked like a LV showgirl, though that occupation would never have been her personal style.  She was temperamental but quite open to trying different approaches, often initiating them.  I never asked “Where did you learn that?” I just enjoyed her making love to me.

I could have done a better job of assuring her, in terms that were meaningful to her, but I didn’t have her verbal aptitude.  Thinking back, I could have learned to express myself in ways that were more detailed, more descriptive and less trite.  I hope that my actions and attitude toward her were perceived as loving.  Maybe a bit, I think so.