It was a dark and stormy month, so are they all, all Allentown Novembers. That’s trite and extreme, but at least gray, overcast, and wet.  This might be an excessive remark, but Novembers in Allentown and area were often just that.  Better than snow storms?  I guess so, just suck it up as everyone else did.

Do you remember the British series, “The Avengers?” It ran during the 60s and starred Patrick Mcnee and Diana Rigg. Mcnee played the starring role as Mr. Steed, as I recall. Diana played his frequent companion, Emma Peel.    His attire was a three-piece suit, umbrella, and bowler hat. Here’s some pics from Google Images.

Mr. Steed of the Avengers

Three-piece suits were the uniform for managers, and of course, I wore them, I think I looked good in a vest. The rain was almost always a constant threat so I carried a furled umbrella as a matter of course.  Being follicular challenged, I wore a hat also, to keep dry, and warmer, at least somewhat. Sometimes in fantasy, I wonder if I could morph into the Mr. Steed role.  Probably not, as my only acting experience was high school plays, though I enjoyed that.

Marge started college stating her preference as acting.  This lasted only one semester as she did not like the major when she got into a course or two.  Who knows what you want to learn as an entering freshman?

Steed and Peel of Avengers

Diana Rigg was born in 1938, so a year older than Marge.  Marge was tall and long-legged, but dressed conservatively, no mini skirts, no below the navel bottoms,  and I can not picture her doing judo, so I guess she would not have had the Emma Peel (Rigg) role.I couldn’t resist the image at the left.  Why didn’t I think of that use for an umbrella, how limited in my imagination!!! I think there’s a back story to the names, but can’t prove it.

And so, setting the scene climatically, My apparel and accessories fit in well with those of Mr. Steed, but the sun always seemed to shine in the video series. In England?? His very British hat and furled umbrella were just for portraying the character, for me they were for keeping somewhat dry and not too cold.  So much for fantasy, and the reality was that November was usually overcast most of the time,  rainy often.

For me, another page on life’s calendar turned over. A birthday surprise that I didn’t care for was a broken tooth, not somebody giving me one, I did it myself.  I am not into self-mutilation but I was eating some Heartland cereal and bit something really, really hard. This knocked out a two surface filling on a rear molar so, off to a dentist on Saturday that week.  Back in those dark days, the dentist did not have those rubbery jaw jacks they have now and the strain on keeping my mouth wide open was worse than the new filling.  I think it is still there in 2017. Good job of it! The fillings then were silver amalgam, and some are still solidly in.  My present dentist said to leave them in as long as no cavities or looseness.

What next? “In flew Enza” as the old gag goes. I hoped it only a cold, but with muscle aches and pains, must have been the flu. But “Cheer up, Things could be worse.”  I cheered up, and sure enough, things did get worse.

Marge and Ingrid took the’70 Ford out one night, I forget going where.  She lost control of the car on a sharp curve and collided with another woman coming from the opposite direction.

Nobody was hurt, shaken up for sure, but no personal injury.Thank god for that!  Both auto’s front ends were demolished, as well as some frame damage. The night was cold and rainy, no surprise, and I think the rain contributed to the crash. I drove down to get them in the International Harvester Scout SUV. 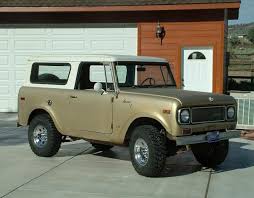 I should have mentioned this vehicle earlier, it was a slightly reconditioned old Postal Service vehicle. It steered from the right side, for rural deliveries.  The stress and worry over the incident as well as the foul weather did not help my cold/flu, but certainly, I had to pick them up.

I owned cars since 1958 and never had a collision claim.  Fender benders, yes, but nothing above the minimum repair cost. I dropped the Ford collision insurance the first of the month, bad decision as it evolved. The rest of the car was OK and worth repairing at my expense. In Coopersburg, there was a one man body and paint shop.  He was able to find a sound 1969 front end, same as the 1970 model, straighten the frame and put everything back together. I planned on painting it later, just in case something else showed up in the repair.

Enough about me and cars, how about the rest of the family?  Ingrid stayed home a few days as the thought she was going to be sick to her stomach and did not look well.  Perhaps this was shock from the accident, but she didn’t get worse and was soon OK.

Louise became enthused during a school presentation from the conductor of a school orchestra at which he interested her greatly in the violin.  I confess, I had my doubts at the time as she expressed no interest in the piano which we had, more or less, forced on her.  Music, however it is played, is a wonderful interest so she started learning on a loaner violin, as I recall. This seemed to be the real deal for her, so Marge and I bought a 3/4 violin advertised in the paper.

The case was sound but scratched and banged up on the outside.  Marge and I fixed that up nicely, good job for amateurs. the violin was dirty so I cleaned and partially refinished it and the overall appearance was quite good. I also reshaped the bridge a bit resulting in a much better sound.  Marge and I were both quite pleased with our purchase, much better than higher priced ones we looked at.  This should take care of Louise’s interest for a year or so, and then if she maintains this interest, we will buy a full-size violin. 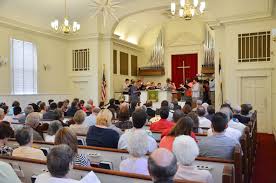 My musical activities include singing in the Coopersburg Moravian church as did Marge, and also playing on the piano when I had the motivation. I could and should practice the piano but don’t do as much as I should, just play familiar tunes. Images are from Google Images. I know the Morning Star sign is correct but am not positive about the church photo.  It was in the same collection, could be, and if not, is very close in design to the church we attended.

I am not sure if we then had the Hammond Chord organ  Col. Sutherland gave us.  Perhaps that was later in the decade, but I can’t find any reference to it.  This was Hammond company’s first fully electronic organ. It was limited in its musical capability, but fun to play and didn’t take up much space. Here is an image of an early model such as we had.

I have slacked off playing the guitar as the lesson class is over now.  I had different guitars on and off, enjoyed them, but was not devoted to the instrument.

The 1975 November weather was about 7 degrees above the historical average.  Still overcast but mild, and hopes are high that December will be similar.  I never liked shoveling snow and we didn’t have enough of it to justify a blower,

Thanksgiving was pleasant and we had Marge’s Mom, sister Pat with her children living in Syracuse as our holiday guests.That was nice, always pleasant to keep in personal touch with family.  I have no more vacation time left so we will stay in town, visit friends, hopefully, go to a New Year’s eve party, stuff like that. The spirit of ’76 will soon be upon us.

I am a retired Professional Engineer who spent my working life in the electric utility industry. I am now a volunteer instructor at the University Nevada Las Vegas (UNLV).
View all posts by R. F. →
This entry was posted in 1970-1980, Allentown, Coopersburg PA, Uncategorized and tagged cars, children, church, driving, health, hobbies, life, music, Religion. Bookmark the permalink.