March is with us and its about time to write another letter. The worst of winter is over, not that winter is extreme here, though exceptions do occur and I have to shovel the drive then.  I came down with a bigger case of the “bug” than I had last month that I wrote about. I did lose a few days work this time.  I had some aches and a headache like the flu, got exhausted very easily from doing nothing.  Also a bit of a sore throat, but not too bad.  I think I am getting over it now though and perhaps this will be it for the winter.

Back to the future.  Considering my history with pneumonia and the severe problems I had this spring I wonder if my 1977 “bug “was a mild case of pneumonia.  It could have been but that’s just a guess now.

Ingrid turned 15 and we celebrated by going to the Shrine Circus which was in town at the time around her birthday. 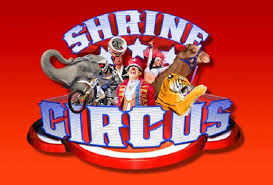 We had not been to a circus in a while and it was something different for us to enjoy as a family.  They only had two rings but the acts seemed pretty fair though.  We all had a good time.

We do have a sump pump in the cellar that does a good job of pumping water that rises to the level of the sump.  If the pump turns on during sleep time, it wakes me immediately and I rush downstairs to assure me the pump is working as it should.  Marge sleeps through this.  If one of the girls makes a sound in the night, she gets up right away and I sleep through it.

I did notice some wet spots in the trailer recently and when it got a bit nicer I went up on the roof and patched some places that looked likely candidates for rain.  I checked that same spot the last rain we had and it looked dry so I think I fixed that problem. 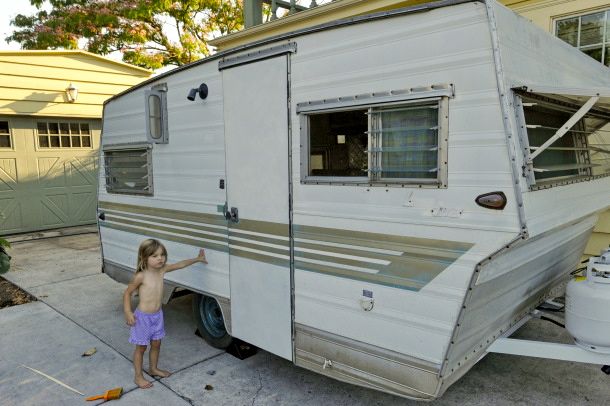 Speaking of the trailer, we took it up to get inspected this weekend. This trailer above is smaller than ours but the general design is similar. We will get it back next weekend and so be ready for the next outing of the year.  This will be in April and after that, we will go on our vacation trip to Charleston, SC.

We have been a little negligent in following up on our dialogue as taught in Marriage Encounter.  We are going to make an effort to be more regular in this part of the program.  It takes a while before it gets habitual and it easy to slip back into old ways and old habits…

Marge is taking her Spanish class at the Allentown Y and when we can arrange it, we have had lunch together.  That is pleasant, something we both enjoy although sometimes other things conflict with this outing.

The end of the month will finally bring about the end of the bills to the orthodontist.  Hooray!!! Ingrid still has to wear the retainer but one day soon she can wear it in the night alone as it is not necessary to wear it al day.  She likes that, you can be sure.

More about Ingrid, she did a very nice science poster on the subject of energy.  She spent a lot of time on it and I certainly hope she gets recognition and an official appreciation for it.  I believe there is some sort of judging process involved.  She did a model of a cell a while back and received an “A”.  I think she will do well here also.

The ground is still mostly brown but we can see more and more green every day.  Also, some of the spring flowers are coming up.  When I get over this cold, or whatever it is, I will have to do some cleanup around the yard.  Also, I have to do some touch-up painting here and there where we have wood trim or when the iron railings are showing some rust.

I have a sense, a feeling that I have left something out but I can’t put my finger on what that might be. But then, Marge wants to add some of her thoughts so perhaps it is just as well that she can share also.

Well, it is now my turn.  I know what it was that Bob forgot – we thought we would lose our cat Rajah a couple of weeks ago.  (my note in 2018, this is not our cat below but one very similar to ours as we have no photos of him)

He had a bad-looking jaw and we took him to the vet in Quakertown.  He said it might be cancerous and if so nothing could be done for him.  However, he removed two wolf teeth on the bottom and the swelling seems to have gone down and healed. We found out how very much a part of the family Rajah is – he is 13 and has been ours for 12 years – longer than Louise! Part of our distress was that Rajah might die alone and afraid in a strange place.  We prayed for him, and part of our prayer was that when he must die, he can die at home in peace.  We are grateful that our prayers have been answered.

Bob mentioned that he has been sick – well, since he wrote the other side, so have the rest of us.  I got whatever he had, and now Louise has managed to get it.  I am looking forward to our trip to the sunny south to let the climate help get us healthy again.  It is hard for me to believe we are going camping so soon. We go with the Campers Club the first weekend in April – it will be sort of a shakedown trip to see that all is well in the trailer before we get so far from home.  Speaking of that, here is the address of the campground we will be at. After the difficulties last year when Bob’s Mom had in trying to find us in Virginia, we thought we would tell you where we will be.  We leave April 7, and that night at:

Now that you have this information, I presume you won’t need it

My Spanish class is a delight – a small group, at the most 6 or 7 of us.  The teacher stresses our doing the speaking in Spanish, and so we make speeches every week;.  I seem to recall saying that last letter.  I will miss two classes on our trip south but will try to keep up.  I am doing very well, if I do say so myself, having a better ear for the sounds than any of the others in the class.  I have some hopes of taking a concentrated Spanish class this summer but will wait to tell you about it if it works out.

I have tried to get to Cornwall to see Mom (in celebration of her birthday in February !) but having scheduled it twice and have had sick people to cause me to stay home and play Nursie.  Perhaps when we come home from the south I will manage to get there.

I am having my annual attack of garden fever –  Bob never gets this disease but very nicely roto-tills the garden for me.  If we get the combination of a healthy and dry weekend, perhaps that will get done soon.  Then I will plant onions, perhaps other things too.

How clever of me to run out of space when I run out of things to say, or, goodbye.

I am a retired Professional Engineer who spent my working life in the electric utility industry. I am now a volunteer instructor at the University Nevada Las Vegas (UNLV).
View all posts by R. F. →
This entry was posted in 1970-1980, Binghamton, Coopersburg PA, Marge Writing, memoir, Summer vacations and tagged children, family, feelings, fun, health, life, pets. Bookmark the permalink.